Why Philly is the Most Underrated City in America

As the season’s change and fall turns to winter, there’s no place in the U.S. more beautiful than the east coast, which is why we chose to stay close to home and venture to Philadelphia for our end-of-the-year stateside trip.

2017 was of significant importance as we marked two years since launching East Coast Contessas – and what a life-changing two years it’s been! In 2017 alone, we traveled to eight countries (including our holiday trip to Portugal and Spain) and partnered with hundreds of consumer and hospitality brands.

One of these early partnerships was with VisitPhilly.com, the official visitor website for Philadelphia travel and tourism.

To celebrate our two-year milestone, we set off in search of fried cheesesteaks, ice cold beer (Philly’s first business was a brewery!), and all of the historical knowledge we could get our hands on.

For accommodation, we were hosted by Sonesta Rittenhouse Square, a modern and sleek hotel just steps from Philadelphia’s most historic sites – literally. In fact, one step out of the main lobby onto Market Street provides breathtaking views of Philadelphia City Hall to their right, while charming Rittenhouse Square is a two-block walk ahead. 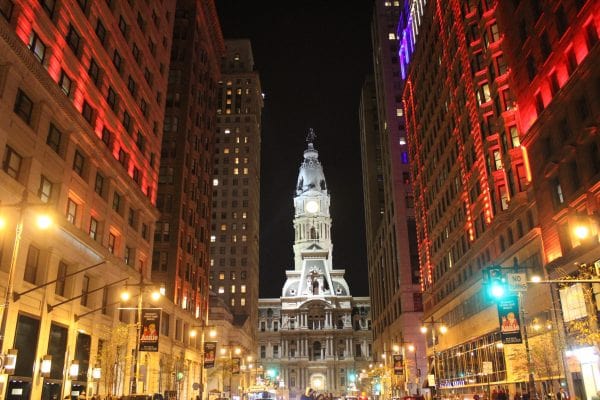 As soon as we arrived, valet managed our car and bags while we checked in (check in is at 4 p.m. and check-out is at noon each day). We were escorted to our 340-square foot deluxe two queen guest room – one of 439 spacious, redesigned rooms and suites in the hotel featuring all the comforts and amenities of the perfect home-away-from-home. 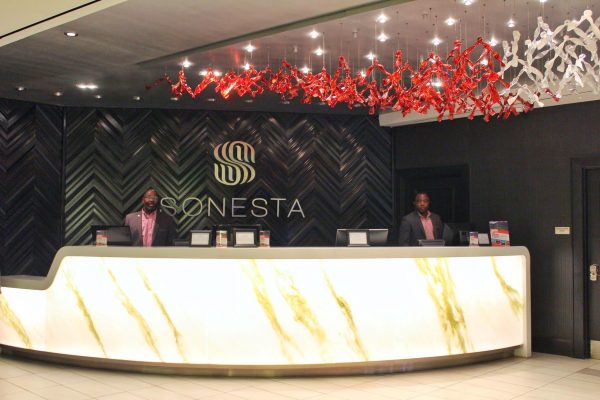 The three of us had more than enough room to lounge, shower, do our hair and makeup in the spacious bathroom before going out, and eat the occasional night time snack while watching the -inch flatscreen. 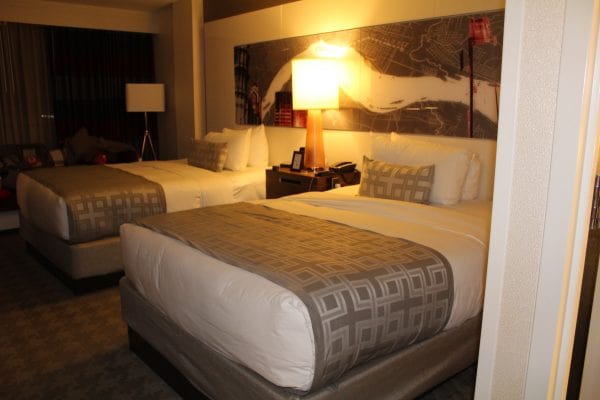 Each of these deluxe rooms has been recently re-designed and upgraded to include complimentary wireless internet service, plenty of electrical outlets both near the desk and beds, and stylishly modern furnishings. While it was too cold for us to venture onto the roof, visitors who book a stay in the summer will even be able to take advantage of their rooftop pool. (We didn’t see the rooftop, but the view of the city from our room was amazing). 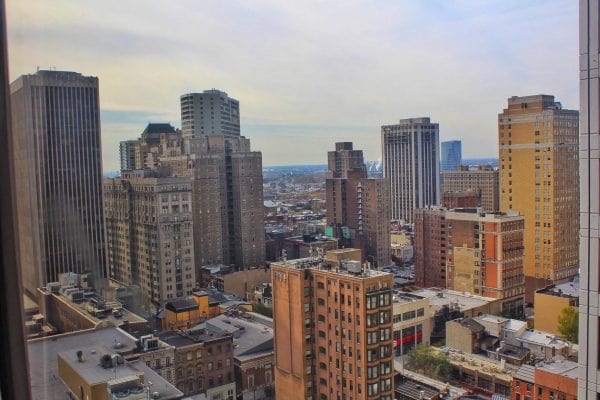 Before we left the hotel to begin our Philly beer and history tour (we’ll get to this later down the post), we paid a visit to the Sonesta’s ArtBar where we sampled some creative cocktails – or “liquid art” as the bartenders referred to it – and watched people hurry past on the busy sidewalks outside. 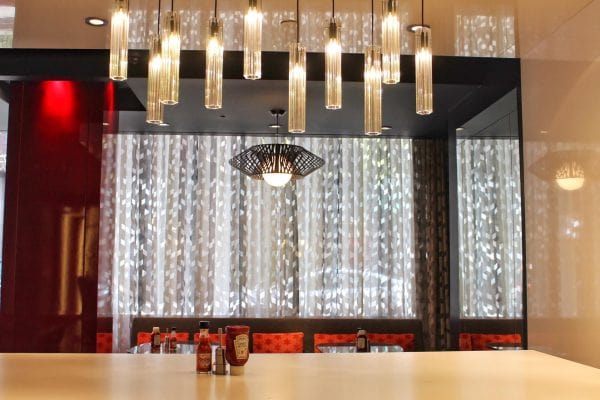 Artbar, which is located in the hotel’s main lobby alongside Ruth’s Chris Steakhouse, offers small plates in a fresh and open-aired venue with happy hour specials from 5 to 7 p.m. every day. Visitors who wish to stay close by will find both comfort and convenience here.

To book a stay at Sonesta Rittenhouse Square for a quick business trip, a romantic getaway, family vacation or weekend escape, visit their website to view the latest packages and exclusives for AAA members and government employees, or call 215-561-7500.

Pro tip: Because the hotel is downtown, street parking is not an option. There is a parking garage attached to the hotel which is valet only and quite expensive ($40 a day).

Filled with some of the nation’s most sought-after cuisines, Philly is a town fit for foodies. Known for the infamous “Philly cheesesteak” sub, we were certain there had to be more to the city’s culinary scene, so we set out to find it. 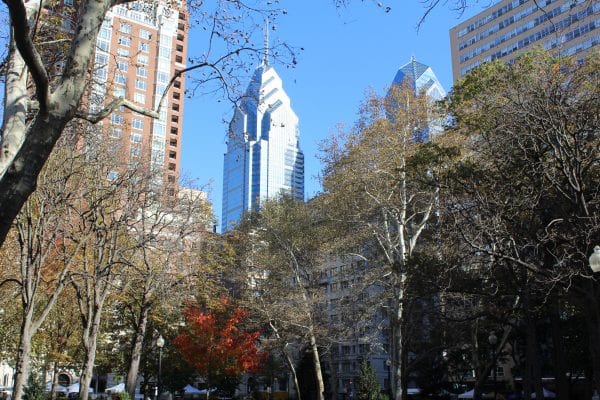 This isn’t a typical dough-shop, however. All the goods are fried up and fancy-fied right in front of patrons as they wait in line so they come out hot and fresh. And when they run out of a particular item? That’s it for the day, folks. 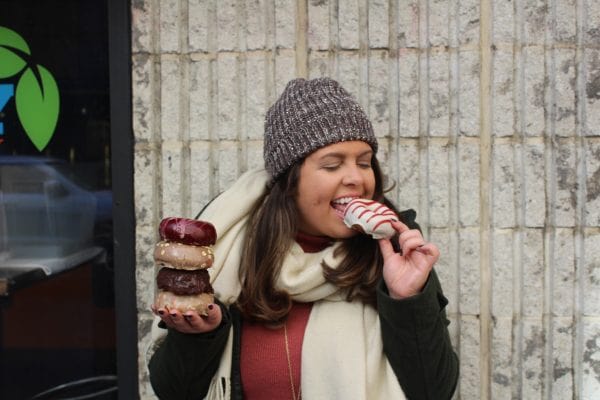 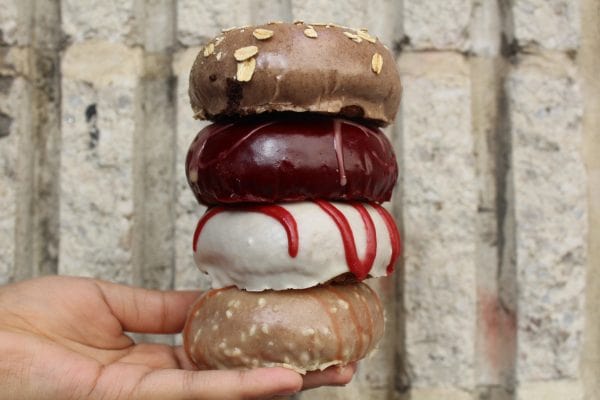 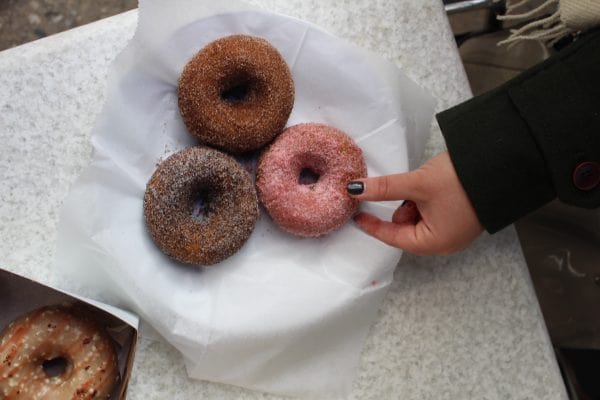 Featuring donuts with seasonal glazes and toppings (and a few regular appearances), the menu also offers a variety of fried chicken in both meal and sandwich form. For us, it was easy to choose what we wanted as soon as we walked in: one of everything.

To give our breakfast the perfect sweet-to-savory ratio, we ordered a signature fried-chicken sandwich with buttermilk ranch seasoning, American Cheese, dill pickle and spicy rooster sauce neatly placed on a toasted Martin’s potato roll. If ranch and cheddar don’t do the trick, Federal offers additional seasonings such as chili garlic, sweet soy garlic, and honey ginger. 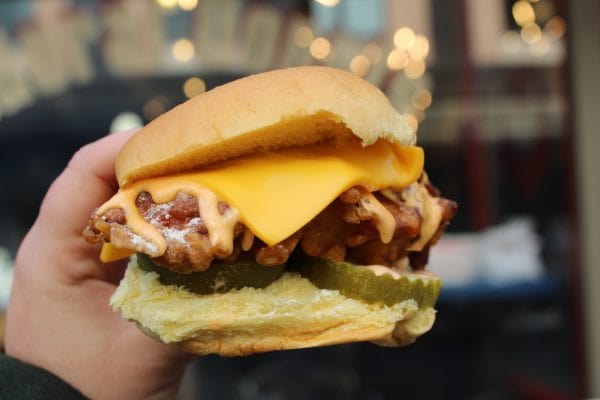 Federal Donuts is open every day from 7 a.m. to 7 p.m. or until sell out, and the fried chicken starts flowing at 11 a.m. until sell out (but pre-orders are available). Check their online menu for current seasonal flavors!

To help soak up the fried goodness consumed at Federal Donuts, we made a visit to Tattooed Mom (TM) for some upscale bar grub and creatively cool cocktails. Centrally located on Philly’s South Street, Tattooed Mom has been offering laid-back lunch, dinner, late night snacks, and locally sourced draft beers for 20 years. 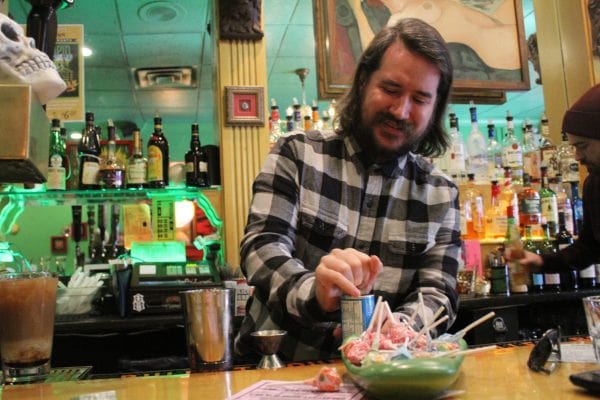 TM’s is anything but an ordinary bar. Adorned with 80’s-themed velvet chairs, floral couches, and tables filled with costume jewelry and temporary tattoos – it’s a trip back in time. 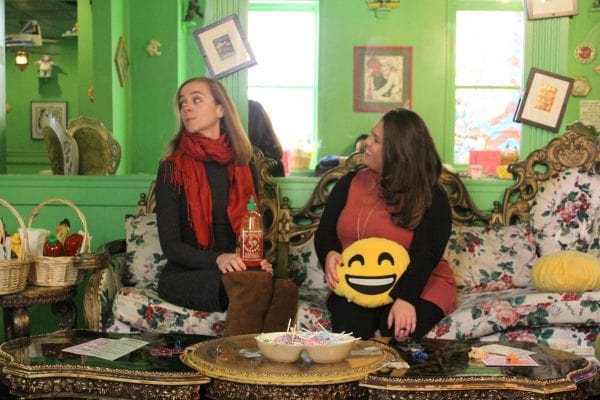 We met with TM’s owner, Robert Perry, who walked us through the creation of the menu and the hidden passageways that encompass the restaurant, literally. Prior to sinking our teeth into brunch, Robert gave us a behind-the-scenes tour of the upstairs bar, which resembled a scene straight out of Stranger Things.

We already knew Philly was the king of cheesesteaks, but TM takes the concept to an entirely new level with their “Chubby Changa” wrap. Fried cheesesteak slices, smashed tater tots, a fried egg, mushrooms, onions, and sriracha ketchup in a flaky, crispy shell are not of this world. 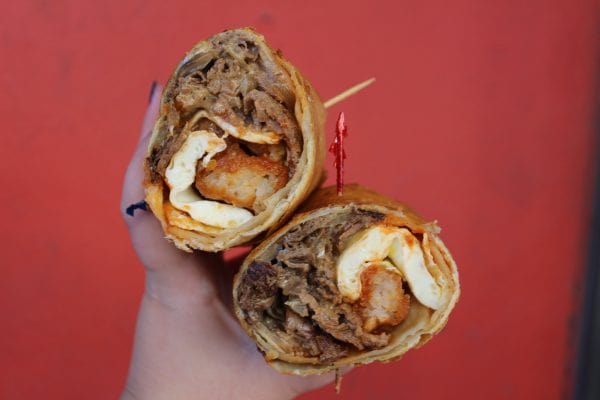 Another perk of TM’s that we can’t go without mentioning, is the restaurant’s love for our veggie-only friends. Sure, burger aficionados from far and wide can get their hands on a juicy meat patty, but the vegan burger (pictured below) gives the red meat a run for its money. 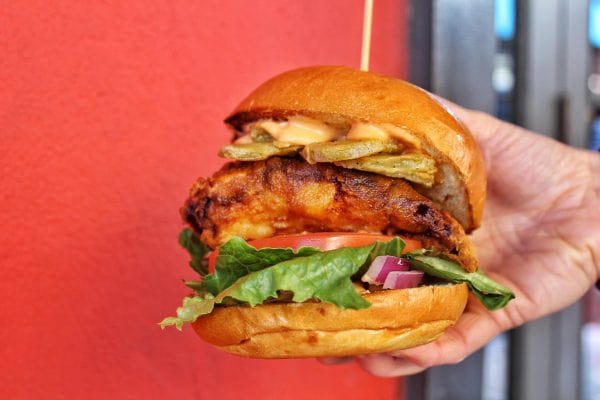 To wash down all the fried goodness, the bartenders whipped up some of their most popular cocktails including the “Tiki Kitty (which comes in a cat tiki mug),” the “Pop Rocket” (with, you guessed it, pop rocks),” and the Manana De Los Muertos (the perfect brunch cocktail featuring a generous ratio of coffee). 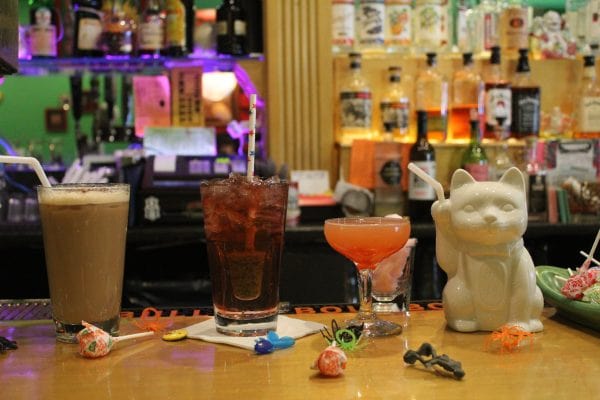 To find out more about any of the items we included above, visit Tattooed Mom’s at 530 South Street, or give them a call at 215-238-9880. Don’t forget to wish them a Happy Birthday as they celebrated their 20th recently!

On third stop on our foodie tour was to Philly’s Chinatown neighborhood for some fresh and innovative cuisine from our friends at Oishii Poke. 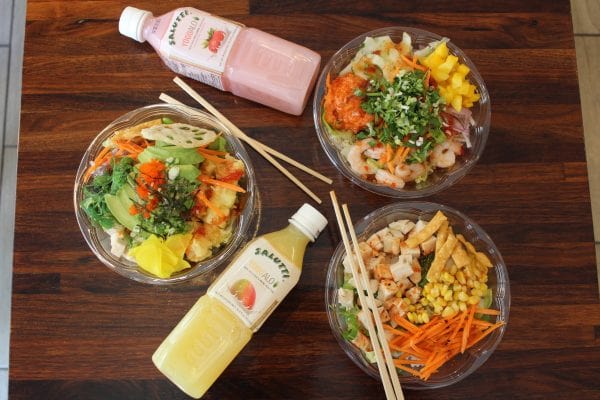 A poke bowl, a food trend you have probably seen clogging up your Instagram feed, is a Hawaiian dish that takes raw fish (or sometimes chicken!) and mixes it in with rice and all the toppings and sauces you can think of. 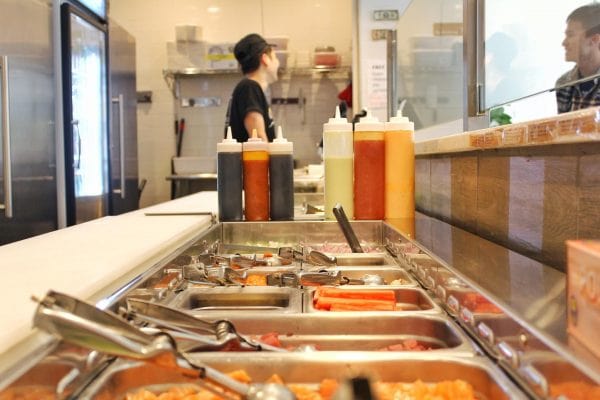 Oishii Poke lets you customize your poke bowl–or a poke burrito or a poke salad –with everything from chicken to eel.  You can then mix and match 26 different toppings and sauces to make your perfect bowl. Think of it as if Sweet Green made sushi. 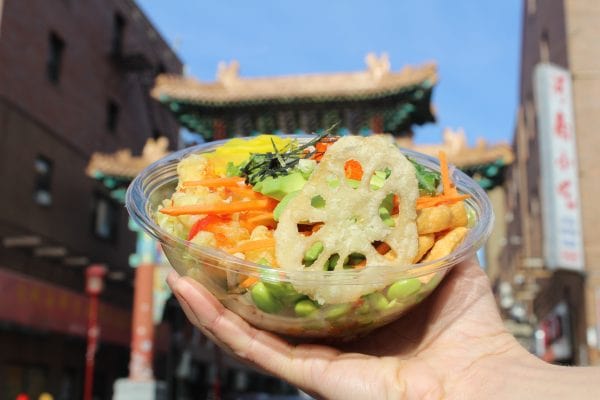 Kuriimii SoftServe
For dessert, we crossed the street to Kuriimii Soft Serve to try some of the most Instagram-able ice cream we have ever seen at east coast contessas. The brightly-lit ice cream shop, which played the perfect mix of K-pop and ’00s music in the background, offers basic flavors like Strawberry and Vanilla and some more adventurous tastes like Charcoal and Green Tea. 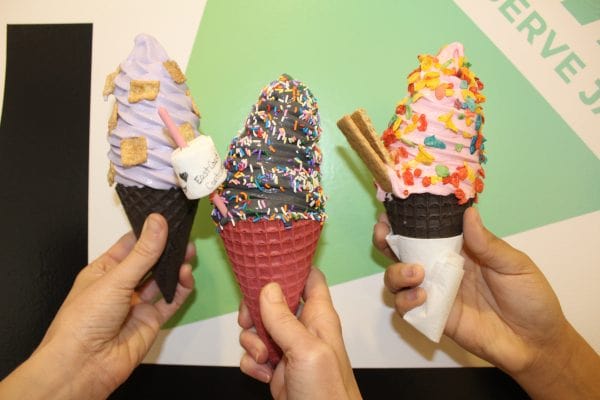 While we got to sample them all, we got large orders of the Strawberry, Charcoal, and Taro flavors, topping them with cinnamon toast crunch, fruity pebbles, marshmallows, and sprinkles (we also had to talk ourselves down from adding gold flakes. Yes, GOLD FLAKES). 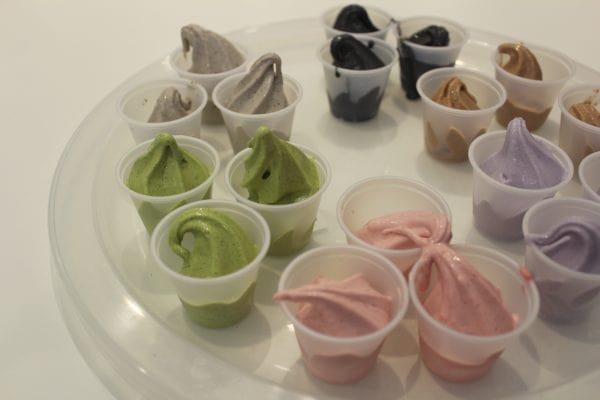 Everyone knows that Philly’s history is unparalleled (don’t tell our friends in D.C. we said that), but we were in the mood for something a bit different.

Philly Urban Adventures offers up some of the cities most popular boozy tours, including “Philly on Tap,” a two-hour tour that led us through the city’s legendary beer scene with numerous tastings at pubs and microbreweries throughout downtown.

We made a toast in Philadelphia’s oldest (and most festive) pub, McGillin’s Old Ale House, built in 1860, and sampled craft brews at an Irish pub with local flair, and a modern beer café where we picked what we wanted out of refrigerators by the bottle. 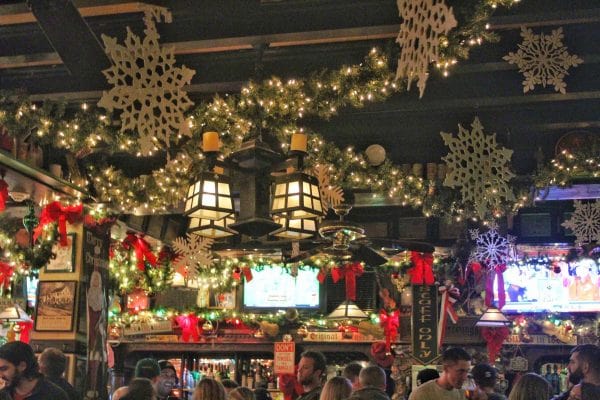 At each location, our tour guide talked about the history of the bar, why they are so popular, and why locals crave a unique and authentic setting to enjoy food and drinks with friends, family, and co-workers. 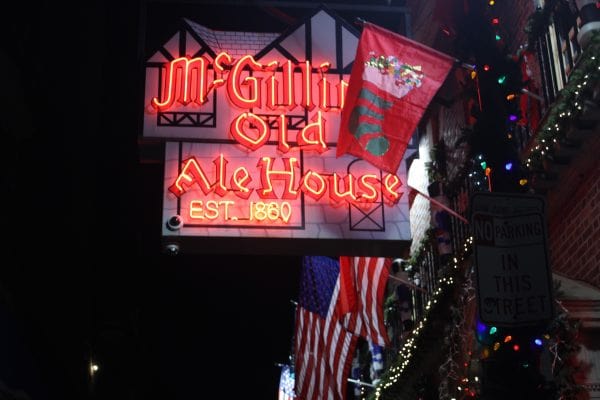 At the end of the tour, we were each served two appetizers to pair with our brew or cocktail of choice and stayed long after our tour guide was gone to chat and mingle with those in our group.

Not only is it an effective way to meet fellow travelers and new friends, but it’s great exercise and provides a new outlook on city life in Philly, especially after the sun goes down. 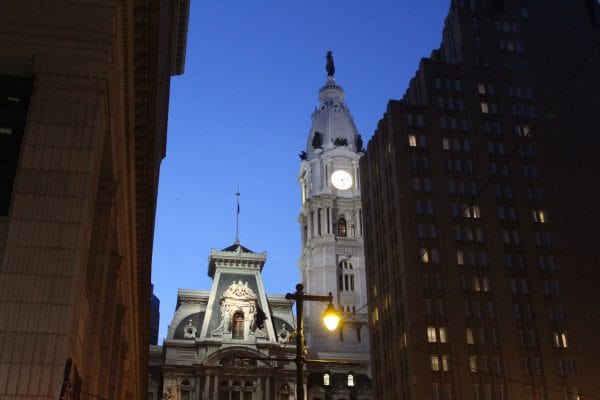 To book a tour with Philly Urban Adventures, visit (website) or call. Pro tip: wear comfortable walking shoes and a light jacket as it can get relatively cool in the evenings. Also, grab a small snack before the start of the tour – trust us!

The next morning after checking out of the Sonesta, we entered one final destination into the GPS: Eastern State Penitentiary.

Once the most famous and expensive prison in the world – and a Philly staple – the eerily beautiful architecture of Philly’s Eastern State Penitentiary (ESP) now stands as a shell full of mystery, untold stories, and haunting history. 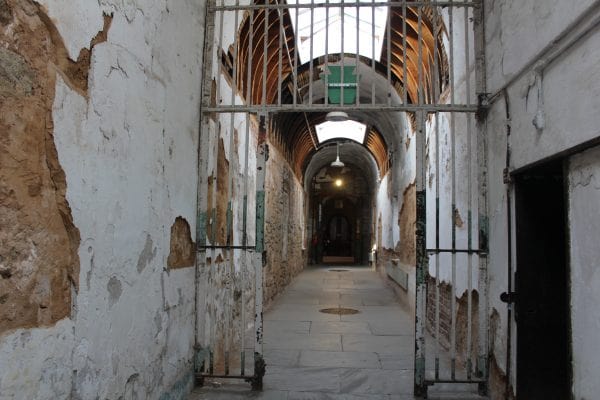 The world’s first true “penitentiary,” ESP now serves as a raw reminder of the way things once were during the age of the American Revolution and the birth of prison design and reform.

In its hay day, ESP was truly a masterpiece of its time. Its high-vaulted, skylit ceilings gave prisoners a rare glimpse of light, which designers thought would encourage spiritual reflection and change. 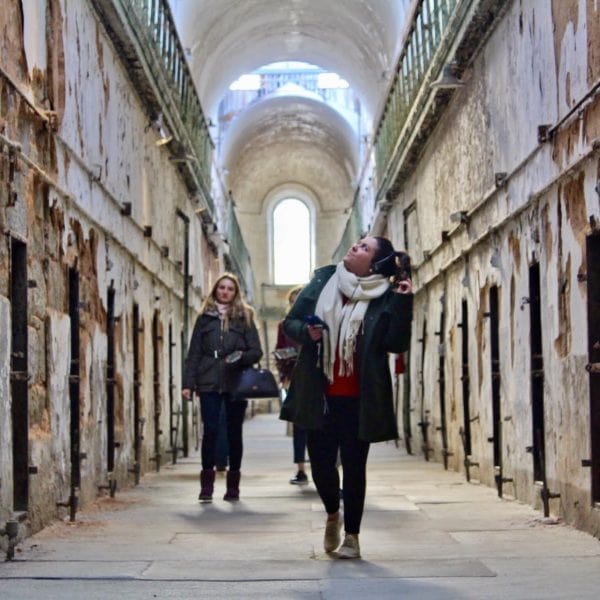 While the prison ultimately shut down in 1971 after 142 years, thousands of visitors pass through what remains of the cells, hallways, and underground passageways one frequented by former inmates such as Al Capone. Thrill-seekers from far-and-wide also make a trip to the haunt to experience “Terror Behind the Walls,” the prison’s infamous annual Halloween experience. 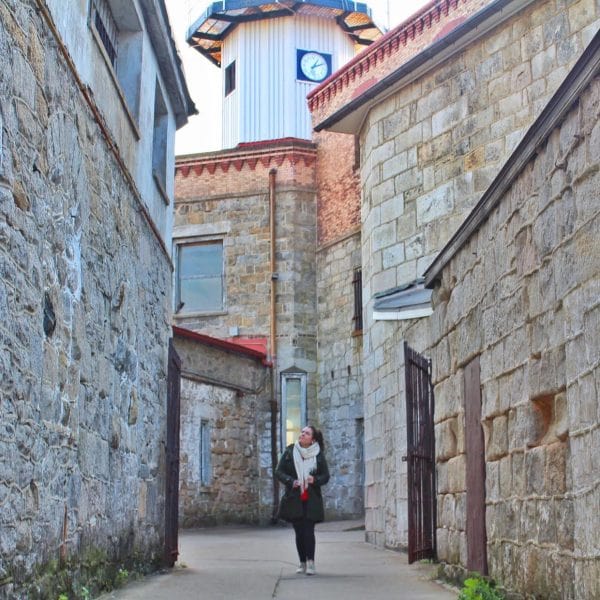 To purchase tickets for guided or self-guided tours of ESP, click here.

No matter the season, Philly has something for every family and everyone. If you’re looking for convenient accommodation close to a majority of the city’s main attractions, click on the link to the Sonesta Rittenhouse Square provided above, and if you happen to stop in to visit any of our partners mentioned above, don’t forget to tell them the East Coast Contessas sent you. 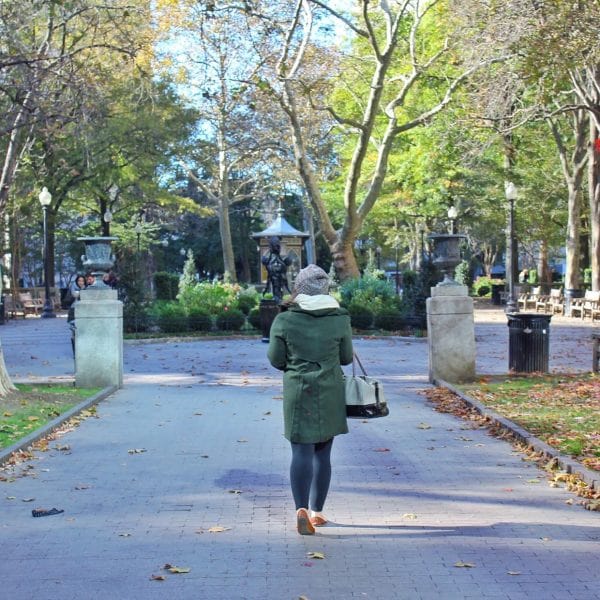