how do sex doll compare to the real thing?

The Best Kept Secrets in Prague (According to an Expat!}

The cobblestone streets of Prague lead visitors to many well-known bars, restaurants, and historical sights. The centuries old attractions like the famous Charles Bridge or the city centrepiece — Our Lady of Tyn Church —, all play a significant role in Czech culture and history. But what about the non-touristy attractions in Prague? 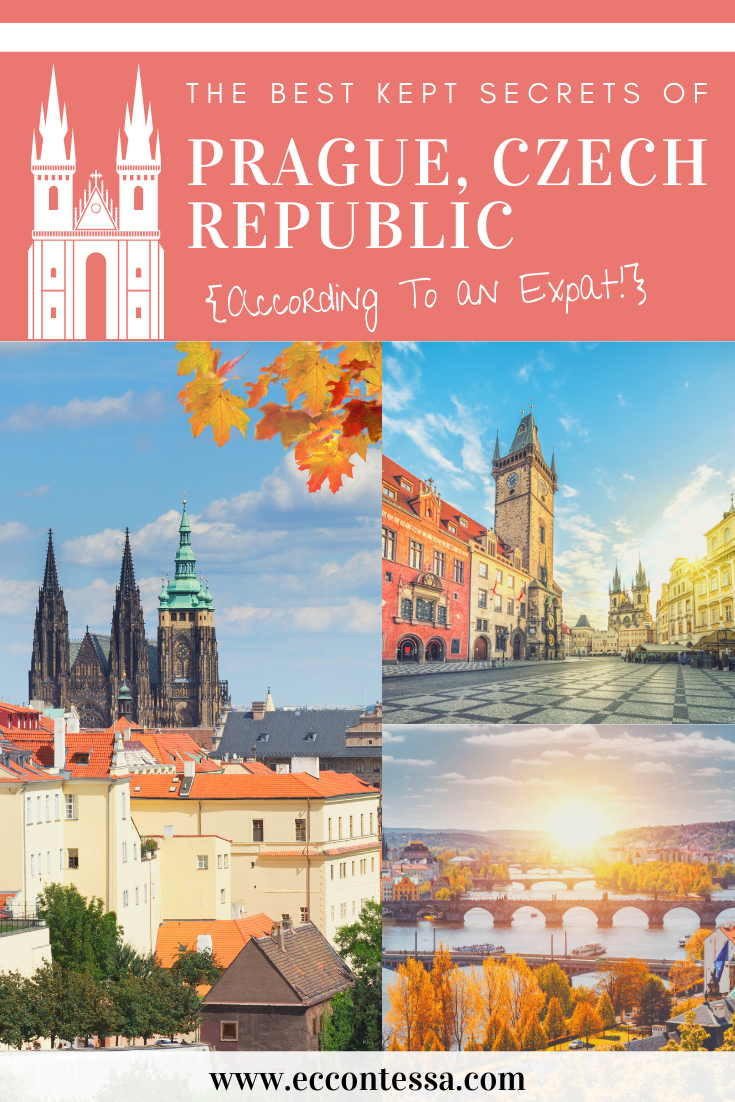 Sure, Prague in itself is a magician.

It hides some of its most memorable parts in camouflaged nooks and crannies, narrow side-streets, and eclectic underground passageways — a new world city built upon the remnants of a dark and mysterious past.

It’s romantic yet gritty exterior has turned it into a prime destination for world travelers, on par with cities such as Paris, Rome, and Berlin. But, the boom in tourism hasn’t come without an increase in over-tourism and cost-of-living prices.

A tour company dedicated to showing patrons the “lesser known” parts of the world is Urban Adventures. An international franchise, the company offers food and historical sightseeing experiences in 68 countries across the globe.

Combining Gothic Art Nouveau architecture with an evolving food scene, patrons get a behind-the-scenes look at some of the hidden non-tourist attractions in Prague.

Read along below to learn more about the itinerary for “New York Times Journeys – Story of Prague: Remarkable Sights and Food” tour.

It’s early on a Sunday morning in mid September. The trees have started to change color and there’s a light breeze blowing through the empty streets of Prague’s Old Town.

My destination is one I haven’t heard of before, even after a year of living 10 minutes away.

I walk through the tunnel below the old powder tower towards a now sparsely populated Old Town Square. I see Our Lady of Tyn Church and jumbo blow up panda bear suits.

In an hour it will be so crowded one can barely move, but I’m not going there. Not at this moment at least.

I round the corner and meet Michaela, a local tour guide who has called Prague home for the last 7 years. With an intimate group of four, we head to the first stop: St. Agnes of Bohemia Convent.

Stop 1: The Convent of St. Agnes

Steps from the heart of Old Town, a dark yet unassuming Gothic structure looms over the banks of the Vltava River. It’s reconstructed centuries old stones cast a shadow over busy side streets and alleyways busy with unsuspecting tourists.

The Convent of St Agnes, otherwise known as the “jewel of the Old Town” was founded around 1231 by Agnes of Bohemia. A princess of the Přemyslid family, she was also the sister of the Czech Republic’s prized King King Wenceslas I.

Today, the convent is home to the Prague National Gallery, covent gardens, and a printing workshop. Here, we tried our hand at caligraphy with an old quill like the nuns used to do.

After, we set out across Old Town making a quick stop at the Astronomical Clock as it struck noon. While it is not considered a non-touristy attraction in Prague, Michaela informed us that while it had previously been voted the “2nd Most Disappointing” attraction in the world, it has since redeemed itself.

We continue on towards Wenceslas Square to experience one of Prague’s newest and most renowned Czech bistros: Spejle.

A new addition to Jindřišská Street, Bistro Spejle has quickly risen through the ranks of Prague’s culinary scene to become one of the city’s most popular restaurants. It’s not just the quality of the ingredients used, either. Spejle offers a unique experience at an extremely affordable price.

Glorifying the concept of the Czech Republic’s popular open-faced sandwich concept, Spejle displays rows upon rows of chlebíček generously topped with vibrant vegetables with savory meat. Others include spreads like hummus, egg salad, and beetroot, and sweeter finds like fig and whipped goat cheese.

Custard filled goodies topped with berries and whipped cream, and bite sized cakes and cookies claimed a significant section of the bar.

Each item on display was speared with a certain number of toothpicks or “skewers”. The concept was simple: the greater number of skewers, the greater the item in price. Not to worry, though. Each skewer is the equivalent of just 29 Czech korunas.

To start our meal, we each choose four spejle’s as starters before the main course of potato pancakes and schnitzel. Naturally, the chlebíčky’s (small, pickable open faced sandwiches) were a hit. The vlašský salát with peppers, hard boiled egg, and baby Swiss cheese became a fast favorite.

We tossed our skewers (and our empty plates) onto the middle of the table for tallying, and hit the cobblestoned streets now in search of Italian dining at another of the city’s hotspot.

Throughout the past decade, Prague’s Italian gastronomy scene has flourished two-fold. At the center of it all stands the mini-empire of La Bottega Linka. Mastered by Chef Riccardo Lucque, this popular bistro and deli boasts a charcoal-fuelled oven, house made pastas, and perfectly cured meats.

Underneath exposed lightbulbs and over sparkling industrial floors, we quickly order a flurry of family style dishes like the “Tortellini filled with lobster in shellfish broth”, the “Paccheri with baked tomatoes, ginger, and stracciatella cheese foam”.

We consumed the last drops of our Lis Neris Pinot Grigio and made our way to our fourth and final non-touristy attraction in Prague for the most delicate and decadent treats.

We took Prague’s historical tram number 23 and rode the rails until we crossed the Vltava River into Little Quarter. From the Hellichova tram stop, we ventured through narrow side streets until we made it to Kampa Island, one of the most beautiful non-touristy attractions in Prague.

One of Prague’s hidden gems, Kampa Island has been voted as one of the most beautiful city islands in the world. Also home to the Lennon Wall and Museum Kampa, it’s base to one of the most renowned cafe’s in the city.

Since 2017, Werich Villa has provided educational programs and exhibits focused on former actor and playwright Jan Werich’s life. The museum also offers cinemas and yoga classes during the warmer months in the garden outside.

On this particular day, admission was free of charge for visitors, but expect to pay 60-100 CZK on a normal day.

We made our way to the attic to learn about Jan’s life as an important moral authority during the Czech Republic’s pre-war era.

After an hour, we hopped down to If Cafe for cappuccinos and traditional Czech desserts. We chose from delicate cannoli’s, Cukrarina, and Hazelnut Mousse with a crispy layer of milk chocolate and hazelnuts (the favorite).

Across the park, we staked out a grassy knoll to people watch, chat, and enjoy the final moments of the tour as the sun set over the Vltava.

Prague Urban Adventures offers the NYT Journeys tour daily at 10am. Groups no larger than 12 discover the best non-touristy attractions in Prague with a local English-speaking guide. Food and beverages consumed at the skewer tasting, one-way transportation on the tram, admissions to sights, a coffee and a snack, and a family style Italian lunch are included in the ticket price. Tips, personal souvenirs, and any other extra purchases are the responsibility of the patron.

To book your experience on the New York Times Journeys – Story of Prague: Remarkable Architecture & Food tour, click here. To check out other tours offered through Prague Urban Adventure’s, visit their website at www.pragueurbanadventures.com.

***this post was created in sponsorship with Prague Urban Adventures.

Alexandra Booze is the editor of the international travel and lifestyle blog, East Coast Contessa. Since 2017, she has worked with more than 500 brands from 40 countries across the globe including hotels, restaurants, tourism boards, and media companies to produce still photography, videography, and editorials. A former public relations executive in DC, she has represented numerous domestic and global companies to provide media relations and marketing strategies. Her work has been featured in media outlets such as Politico, the Wall Street Journal, The Hill, USA Today, and Huffington Post's Thrive Global. Most recently, she was a feature in New York Time's Best-selling Author Chris Guillibeau's book, "100 Side Hustles", a book about successful entrepreneurs across America. Originally from the United States, she most recently lived abroad in the La Rioja region of Spain were she worked as a freelance travel writer and English teacher at the renowned Escuela Hostelería y Tourismo culinary school in Santo Domingo de la Calzada, Spain. Prior to that, she lived in Prague, Czech Republic where she worked as a freelance travel writer and marketing consultant for hospitality brands across Europe. She holds a bachelors degree in Editorial Journalism and a masters degree in Public Administration and Foreign Affairs from Western Kentucky University.

7 Easy Pantry Recipes from Around The World

Travel Tips: How To Pack Your Carry On Like a Pro

The Big Easy: The Ultimate Travel Guide to NOLA

This site uses Akismet to reduce spam. Learn how your comment data is processed.

abooze1
Fiverr
Seller
Hi there! My name is Alexandra (Alex if you like), and I am a public relations and marketing professional specializing in media relations, influencer marketing, and editing. Originally from the U.S., I have lived abroad in the European Union since 2018. Throughout my nearly 10 year career, I have worked for one of the world's largest corporate companies, numerous national non-profits, and more than 450 consumer brands from 33 countries across the globe. I should mention I'm a content creator and professional writer myself, so I know the media industry like the back of my hand!
Latest Tweets

Wondering what DC's best-kept secret is according to @ECContessa? The River Inn! http://bit.ly/2qHqniB

This website uses cookies to improve your experience. We'll assume you're ok with this, but you can opt-out if you wish. Accept Read More