Surrounded by the glow of the nation’s Capitol, amongst the hustle and bustle of thousands of the country’s most rich and powerful, lies a monumental attraction of a different kind that deserves admiration and recognition in its own right.

Barrel, a rustic yet cozy whiskey bar known for its southern fare and flare, has quickly found itself amongst the best and most palatable grub hubs in the city – and executive chef Garret Fleming is all too familiar with praise and recognition. 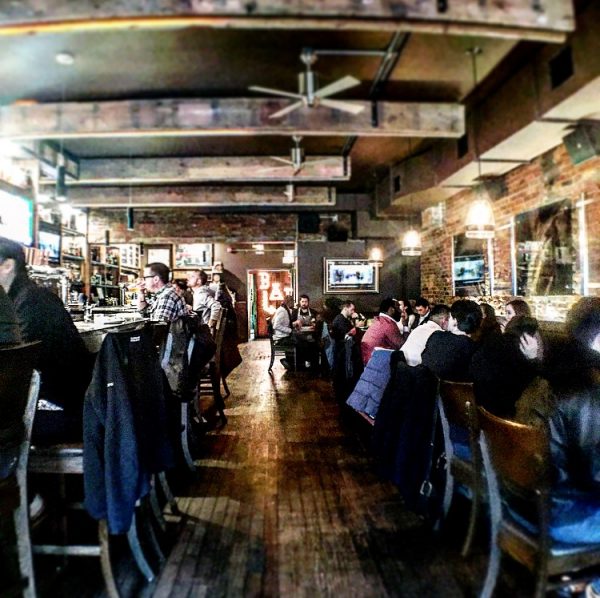 While the former Bravo Top Chef contestant’s time on the big screen may be over, his adventures in the kitchen crafting some of the nation’s best brown water cocktails and brunch bites are far from over.

Fleming has built nothing short of a southern dynasty just north of the Mason-Dixon Line. Sugary sips with names such as “Members only” that features a mixture of Ford’s Gin, Campari, Raspberry Syrup, dry vermouth, lemon, and egg white, and “Last Resort” that is a dreamy concoction of Bulleit, Licor 43, Cynar, Angostura, and orange bitters grace the Elixir Bar menu.

After taking one good look at us after coming in from the blistering cold, our informative and delightful waiter Sam recommended the “Milk Punch” cocktail – a beverage with a slightly sweet yet potent punch (no pun intended) that contains rum, brandy, vanilla bean, carmelized bananas, brown sugar, and maple syrup. (Trust us, it is magic in a glass!) The liquid goes down smooth and leaves a surprisingly yummy aftertaste, much like a mixture of tropical fruit with the subtle undertones of nothing but southern goodness. 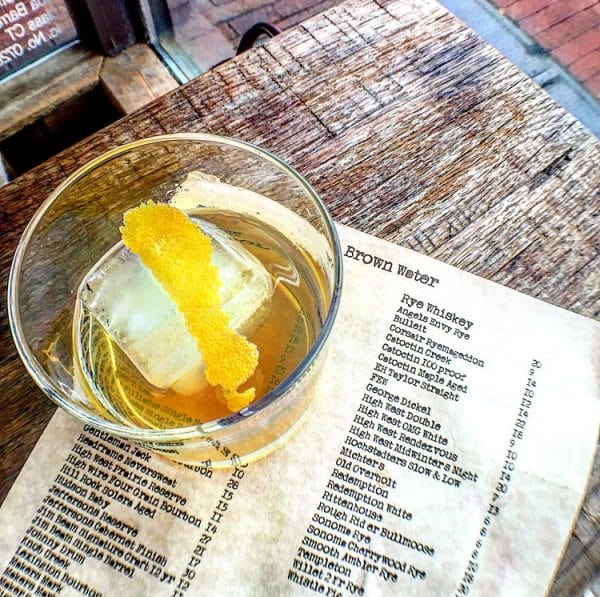 Not stopping there, Sam decided we couldn’t make a trip to Barrel and not take full advantage of the self-serve bottomless mimosa brunch bar (how does he know us so well already?) The bottomless brunch that runs from 10 a.m. to 4 p.m. Saturday and Sunday features house made simple syrups that guests can add to their orange or cranberry mimosas, which they can also pour themselves to get the right amount of champagne:juice ratio. (Considering how incredibly impossible it is to find a brunch in DC that serves mimosas with the correct ratio of juice to the stuff we really want, can we get an Amen?) 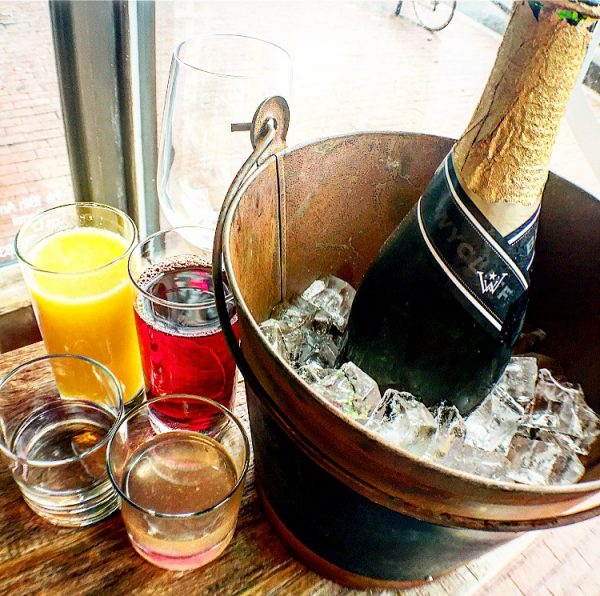 The friendly staff showered us with a bucket of chilled champagne accompanied with fresh raspberry pineapple simple syrup, mint lemongrass simple syrup, fresh squeezed OJ, and cranberry juice. While it was a treat to be able to pour our own champagne, it was the simple syrups that sealed the deal. Even after all of the brunches we have attended (most of which we remember), these mimosas were the freshest, most flavorful mimosas of all.

Let’s just take a close-up so you can appreciate the consistency of the yumminess within the glass. We think this pour-form of the raspberry pineapple syrup deserves an Olympic gold: 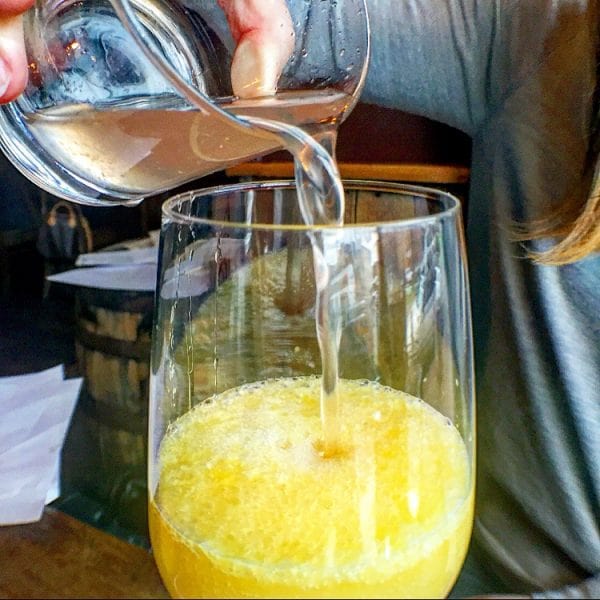 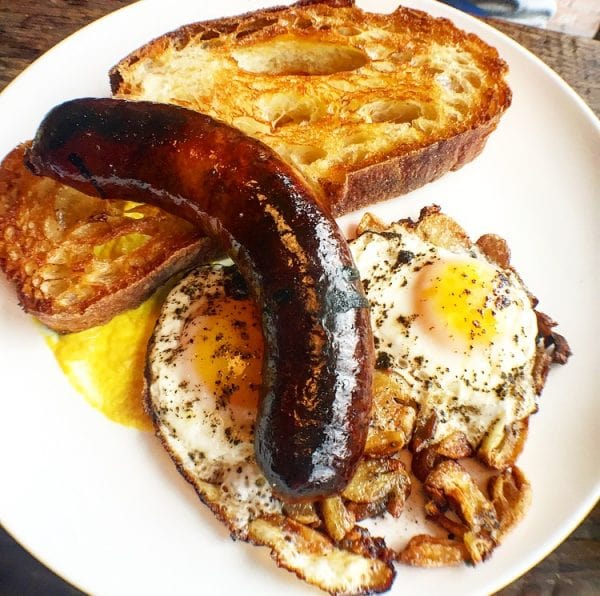 Chef Fleming started us off with the creamy, crispy Croque Madame made with ham, crab mornay, egg, and chard (a green, leafy vegetable), all on top of a thick slice of lightly toasted bread. 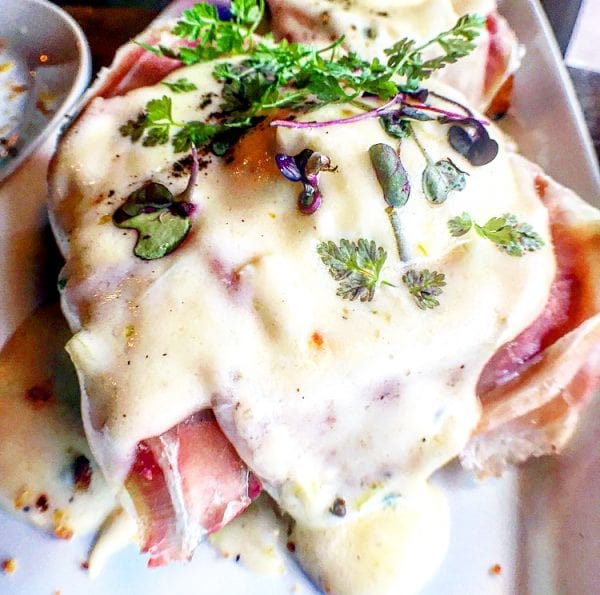 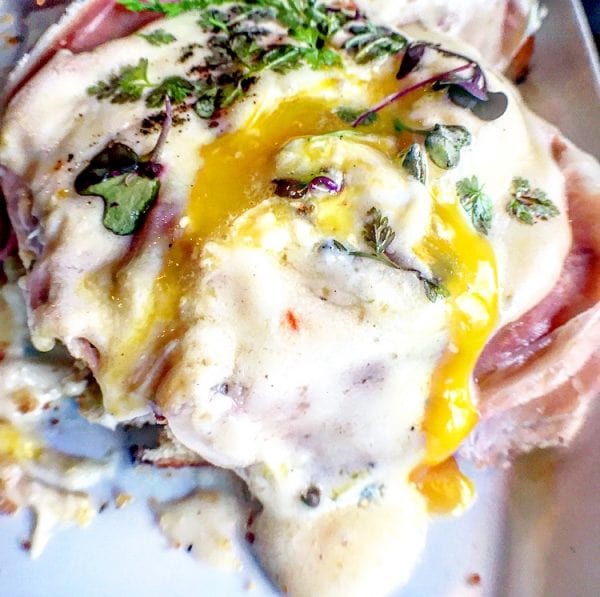 Next up was the Mac n’ Cheese. Before we dive into the details of this rich and cheesy dish, let us first take the time to distinguish this mac n’ cheese from all others. Made with five different types of cheeses including aged Wisconsin parmesan, fresh goat, gruyere, fontal, and topped with fontina, the dish is SO good, that a popular food magazine asked for the recipe! We won’t ruin the surprise of course, but let’s just say we can certainly see why they want to share Chef Fleming’s secret with the world: 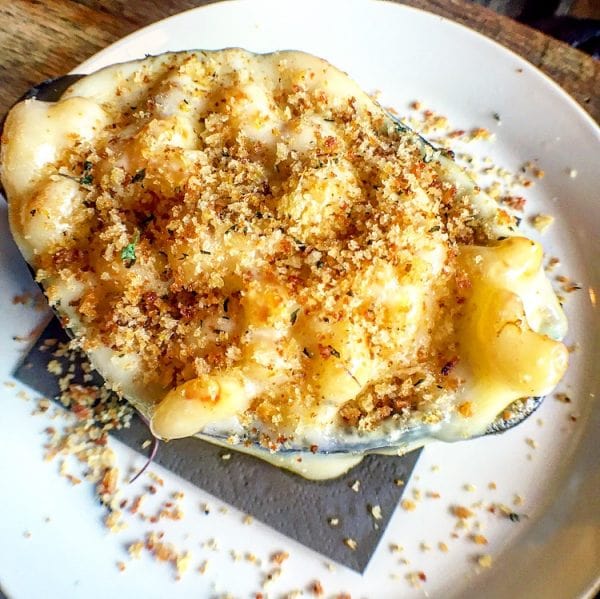 We decided to dig into the Fried Chicken, Sausage Gravy, and Peach Jam Biscuit dish next which was a pure southern delicacy. The crisp boneless chicken breasts and fluffy biscuits made these former belles swoon! The mixture of the sweet jam with the salty brown gravy was a match made in foodie heaven: 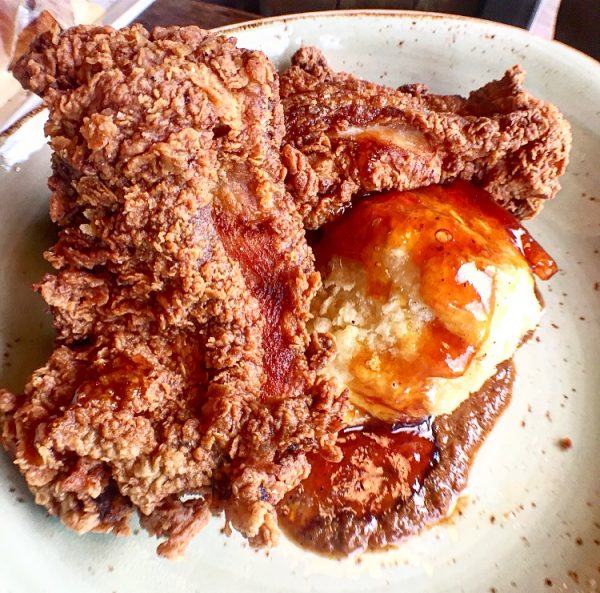 Working our way through the massive feast before us, we decided to take a stab at the Jagerwurst, Baked eggs, Roasted Garlic and Toast dish. Chef Fleming starts out with crushing slivers of garlic in a pan, adding cracked eggs over the top once the garlic is browned and roasted. A blend of secret spices is dashed on top before it is served along side a perfectly toasted piece of bread and a giant, juicy jagerwurst.

Just about stuffed to the brim, we still had quite a few surprises in store (but don’t worry, we always make room). Next, we decided to expand our horizons and dig into the Cauliflower Migas with Chilis, Peppers, Currants, and Poached egg. For a dish with such seemingly simple ingredients, it sure packs a flavorful punch. Spices such as curry, turmeric, cayenne, and smoked paprika dance around a mixture of chopped jalepeno and chili peppers and baked cauliflower for a smoky flavor with subtle spice. 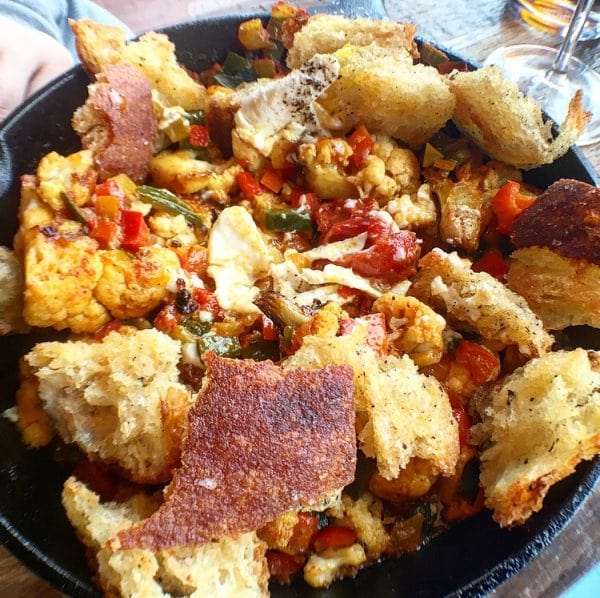 The skillet dish is topped off with crunchy croutons and a poached egg with creamy yolk. Here’s a closer look: 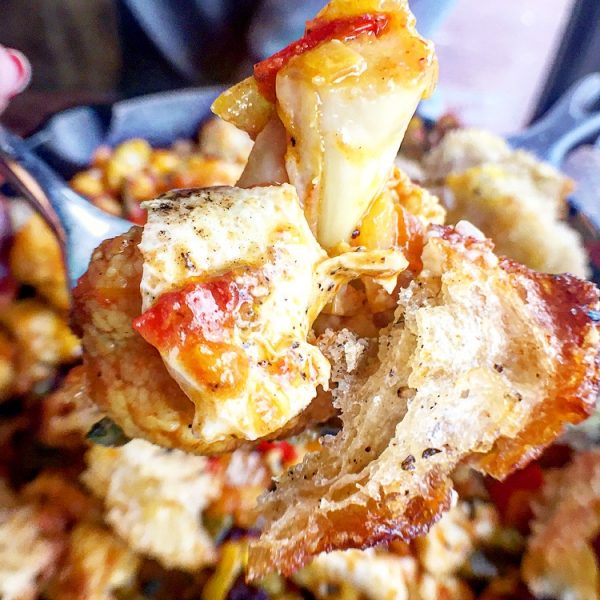 Taking a glance down the table, we realized we had one final dish left: the glorious, ginormous, warm, gooey cinnamon bun. This wasn’t your average cinnamon bun, either. This big ole’ bun was topped with a melted cream cheese glaze mixed with the perfect pinch of bourbon. 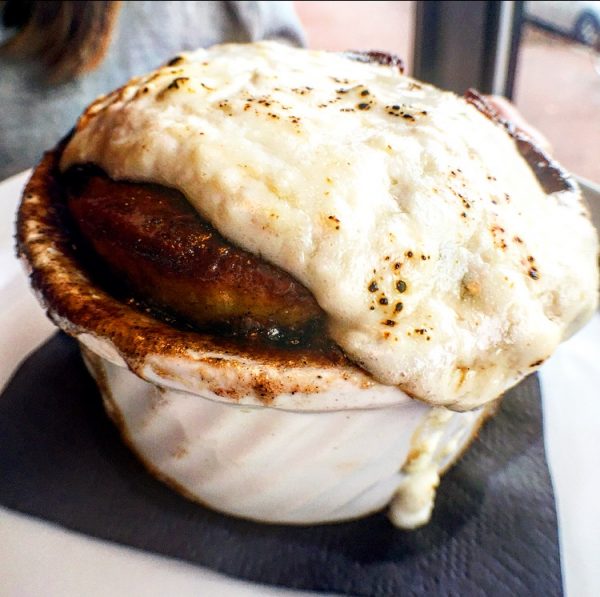 To make this treat even sweeter, underneath the cinnamon bun was a 1-inch thick layer of carmelized brown sugar, cinnamon, and butter.  Check it out: 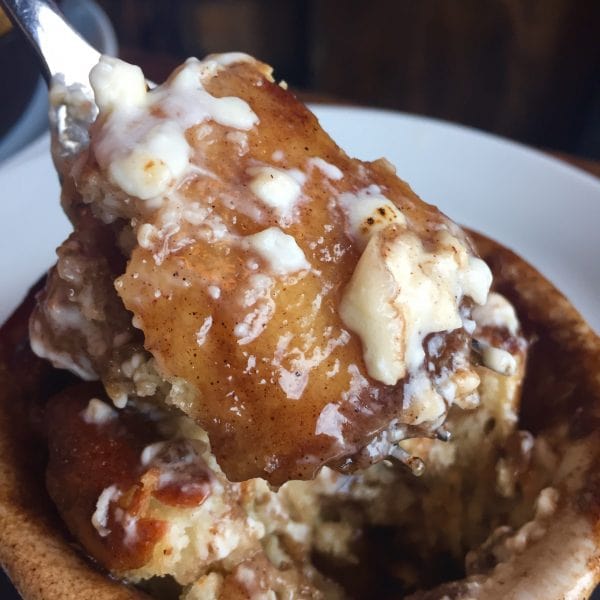 As we finished up our cocktails and enjoyed the feelings of our overstuffed but satisfied bellies, the gracious staff led us to the room we dubbed the “bourbon basement.” 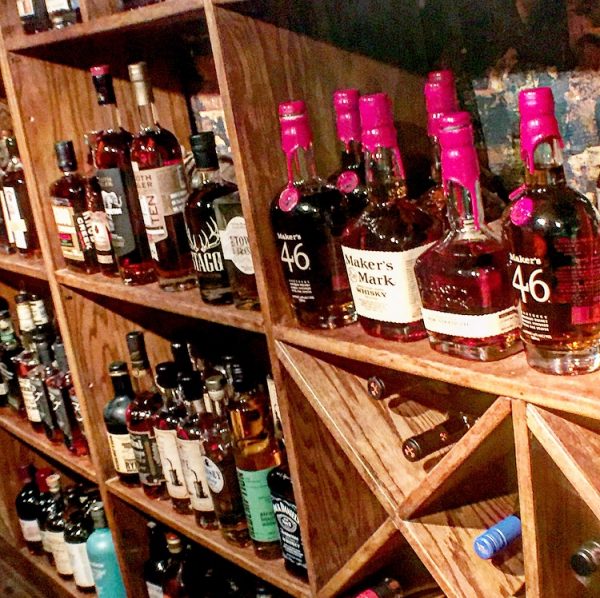 In a dimly lit private room below the main restaurant is a hidden gem full of some of the world’s best bourbon-whiskey (some they even age in barrels themselves). In fact, just behind the bar on the top floor, visitors can find what aged bourbon is currently on “tap,” which flavors are up next, and which flavors the elixir masterminds are brainstorming on mounted chalkboards.

Barrel is truly an experience unlike any other; a unique and thrilling gem tucked away in the heart of the nation’s capitol that offers visitors a chance to export themselves south of the Mason-Dixon in a matter of minutes. With its friendly staff, one-of-a-kind dishes, cocktails that don’t skimp on the special sauce, and knack for creativity, Barrel will hopefully remain a staple of Capitol Hill for years to come.